skip to main | skip to sidebar

I went back and forth with this.

The more I thought of it, the less I wanted to do it. But I feel it is becoming easier to listen to myself. When I have trouble asking someone for something it is usually because I wouldn't ask myself and when that is the case, it is usually because I don't agree with myself. When I feel I should or that it is better to do something, I have no problem asking people for it. So it is not out of shyness that I stop myself, it is out of common sense.

It is not all that easy to understand. If I have an idea, it is because I want to do it. Why have a wish you don't wish to carry out? What happened in this case was that I agreed with the idea but not with the timings, the means or the limitations for that matter.

The idea stands. I will set out in this continent and the others, sooner rather than later, connect coasts, meet people. It will take me as much time as it takes me.

This, as it turns out, was not my last march in search of a sight of blue on blue. It will be but the glimpse of the first.
Posted by MiM at 14.5.08 No comments:

The term Virada Cultural can be loosely translated as Cultural Turn Around, an event where one is supposed to turn the day around and stay awake all night. It is said, over here, that it is a sort of São Paulo's version of the famous Nuits Blanches in Paris, but this is something else.

People, by the hundreds of thousends, went out to the city centre and decided that it was São Paulo that should be turned around instead. Turning every street into a disco, every step into a dance, every corner into a kiss, they turned São Paulo into the best disco I ever laid foot on.

A Brazilian said to me something about Italians that I wholeheartedly agree with. But let me be the one turning things around this time and let me say it about the Brazilians:
If one measures how civilized a people is by its love of music and its dread of war, then Brazil is the beacon of civilization.
Posted by MiM at 29.4.08 2 comments: 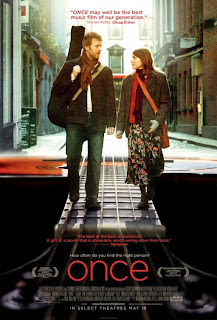 The acting is not more than adequate. The music is. But still, Once would not be a remarkable film for most. It is to me.

Awarding it the owra is more of a show of personal gratitude to the makers of the film than an actual praise of it. Of course I was dying to see it and I more or less knew I would be awarding this movie before I actually laid eyes on a frame. But I take these things seriously and so I went to the theater and sat through the thing.

I am very happy I did. The film connects to more than in the way of a personal experience about a song I had heard in a concert and that had stayed with me, mostly covered in silence. It connect to me as an European. In the midst of this vulcanic melting pot called São Paulo, SP, Brazil, I was remembered of an Europe that unites throught sense and sensitivity what that same sense and sensitivety once separated. A melting pot in slow cooking, where east and west, north and south learn rather than teach, sing rather than shout.

I might have jumped the gun there.
The other day I was invited to go to the Morumbi stadium by a São Paulo FC fan, to watch them eventually go through to the knock-out stage of the Copa Libertadores. And I have to say I thoroughlly enjoyed the whole thing, from the meaty sandwhich I ate before, to the singing and jumping of the crowd, to the undeniabe class of Adriano, even when displayed in short glimpses as it is the case these days.
I am terribly sorry and I apologize to all the palmeirenses, but I reckon the são paulinos got to me first.
Posted by MiM at 26.4.08 No comments:

It set the standard.

Wherever we were going to live from then on, it had to be that good. Whoever had to find a place to for us to stay, it had to live up to that room;
preferably (didn't it happen always?) with a mezzanine.

The city is fabulous, the city is Paris.
But I hold closer the memory of that place, lying above ground, well in reach of the ceiling. That and the dying moments of the night we would spend learning Portuguese from the tales of Fada Oriana, learning Italian through French and French through Italian. That and the moments we would fall asleep , well in reach of the ceiling, listening to slow music* about rooms that had none.

* As little as anyone could have guessed, little did we know we once fell asleep to the mellow voice of a first lady to be.
Posted by MiM at 25.4.08 3 comments:

It was the 21st of April, yet another anniversary of the popular movement called the Inconfidência Mineira, that declared the first Brazilian epublic as far back as 1789. To no avail of course, as the Portuguese readily qwelled the rebels, took their leader, Tiradentes, hung him and sliced his body, sending the different parts for display in several cities of the colonial Brazil. The capital of the province of of Minas Gerais, where Tiradentes was from and where he had gathered his backing, was Ouro Preto back then. And that is why it was awarded his head on a stick.

So be it. As a proud representative of the Portuguese atrocities, I decided to attend the cerimonies in remembrance of this "rebel hereo" of Brazil, in the central square of Ouro Preto, most appropriately called "Praça Tiradentes".

I headed to the square, holding a pamphlet exerting the silent crowds to rebell, like the heroe of the Inconfidência Mineira had done, against the horrors perpretated by the imperialistic leaders, "no different from the Portuguese", that are leading the country to ruin. The piece of paper came quite in handy when I used it to wrap a Coca-Cola tin can that I had in my other hand, so to give the emsemble more aerodynamic pull, when I threw it into the bin.

I could already see te back of the stage that was set, and listen to the army band that was playing some old tunes, classic bossa nova stuff and some military marches. I could hear it from a distance.

But as I drew nearer to the square, the band became silent for a second, as though they were preparing something fresh. I reacted to the surprise a bit faster than most, as the first silent chords of the famous melody had already given it away to me. The smile only came upon everyone's faces when the familiar tune of Indiana Jones spread around the square. 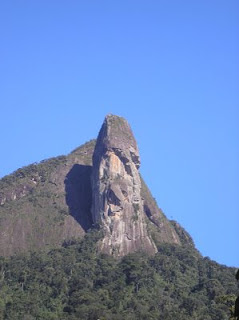 This was the place, this was the threshold, where the road became too winding. The place that was too far away from my sea, too close to something else.

This was the first point where the pioneers started taking inroads into the Brazilian wilderness, setting as their only reference an identifiable rock in the hill, awkwardly shaped like a dick.

And it makes complete sense to me. If I was ever to break the threshold and start taking inroads, I would start by a rock that is shaped like a dick. In fact, that's exactly what I did.
Posted by MiM at 22.4.08 2 comments:

It is mostly a blur to me, a phase in between, something of the premise of what was to come already there. Vivi had just spent some six months in Coimbra and then Lisbon and there was the vague plan to move out of Portugal, find something "in Europe" for both of us to stay together. Nothing definite.

And yet, there was something creeping under my skin. The only clear idea in the midst of the blur that comes from that period, is the memory of a party in Frágil were I got the most drunk to date and I decided to rank my degree of drunkness by my willingness to vote for Cavaco for President of the Republic (I havent't got to that point yet, although I have sometimes reached the point when I thought he was not so bad). I have smiled as much as I did that night, but never for so long in a row.

Something was creeping under my skin. An idea. Here, there, wherever, I was definitely gonna be an indie kid.
Posted by MiM at 16.4.08 No comments:

Between the Tyrrhenean and the Ionian Seas, July 2006

On the deck of a ferry boat that was carrying my train into Sicily, a girl couldn't help but asking what a ragged looking guy, gathering thoughts on a ragged looking notebook, was doing there. "I'm travelling, I answered, just losing time".

She then told me that i looked like Lorenzo Cremonini: "you know, the guy from Luna Pop". I didn't know, but I pretty much took it as a compliment.
Posted by MiM at 16.4.08 No comments:

Beauty always comes first
Even if it usually doesnt come at first.
Posted by MiM at 16.4.08 No comments: